The Bakelite Brownie Box otherwise known as the “The Kodak Brownie Cresta”. Kodak enjoyed using the moniker “Brownie” to sell their wares as long as possible. Of course there has been much said about the Brownie camera, and I won’t attempt to repeat what is easily found already on YouTube and the rest of the Internet. So to the story, how did I come across this brown plastic ribbed gem ?

So to the story, how did I come across this brown plastic ribbed gem ?

If you are looking for high resolution and super sharp this is not the camera for you. The Cresta has a plastic lens in a plastic bakelite box, it’s certainly not high-end! But of course that’s not the concept of this camera of this project for that matter either. It was intended for everyone to take photographs without thinking too much regarding settings. In fact the camera has three settings for the “Kodet” lens, yellow filter for cloudy days, normal for everything after 3 or so metres, then there’s the close up option. The close option is another plastic fantastic lens which slides across to give you the ability to take pictures from 1 metre to around 2.  Nothing on this camera is precise.

My intended use was to make double exposures and capture a hike in the mountains with a degree of nostalgia. Which this camera excels at. It’s really a no brainer to use. The camera takes images in 6×6 format so a roll of 120 film gives you 12 exposures.

After routing through the stalls of the car boot sale here in Graz, I came across the Cresta, immediately I liked the look of it. A classic design, the seller included the leather case too which is always a nice find. All for the price of €3.50 well under $5, so it was deal. 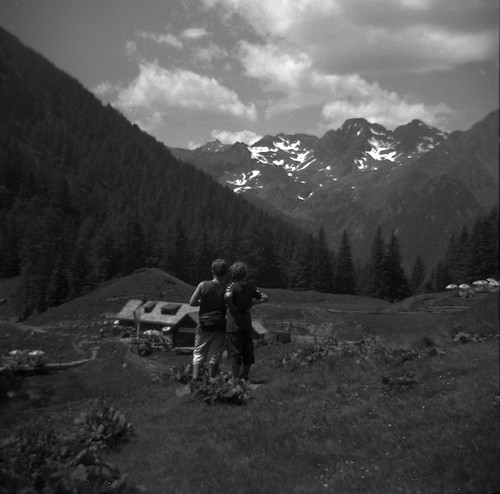 Now you no know where the camera came from but where is it going to ? so here comes the location…. The Tauren in Austria. A mountain range of the Alps which is wonderful in summer for hikes. Having filled our Thermos’ with cold mountain water it was time to march upwards to the top in the heat of the day. The top is where the Duisitzkar lake is splendidly surrounded by mountain ridges. The Brownie had already been preloaded with Ilford PanF ISO 50 film for the occasion. Here on this blog you can see the results self-developed in Rodinal Developer.

My intended use was to make double exposures and capture a hike in the mountains with a degree of nostalgia. Which this camera excels at. It’s really a no brainer to use.

Double exposures are really easy to do with this kind of camera. Actually often I make them unintentionally by forgetting to advance the film. I say ‘advance the film’, well there isn’t a battery or electronics in this camera. Moving to the next frame is done manually by twisting the white knob on the top of the camera.

Jesse on the boat, Duisitzkarsee

Jesse on the paddle boat

Jesse in the clouds (Jake behind him)

The Kodak Cresta Brownie is absolutely a great camera for not only double exposure but also from Lomography. Similar to the Agfa Clack in how it simply functions especially in the realm of lomography

The Brownie Cresta was made by Kodak Ltd. in the UK between 1955 and 1965. This version here is the first one which was made between 1955-1958 being made of bakelite plastic.  The shutter was single speed, approx 1/40s.   Source : http://camerapedia.wikia.com/wiki/Kodak_Brownie_Cresta

Whether the Cresta is made of Bakelite or not, I believe it’s a more modern version plastic. However it’s still has that Bakelite warm feel. A black hard moulded shell, which would break or crack if drop on a hard surface. I’ve included two videos on Bakelite, which are fascinating.

Leo Henricus Arthur Baekeland (November 14, 1863 – February 23, 1944) was a Belgian-born American chemist. He invented Velox photographic paper in 1893 and Bakelite in 1907. His invention of Bakelite, an inexpensive, nonflammable, versatile, and popular plastic, marked the beginning of the modern plastics industry.

Bakelite or polyoxybenzylmethylenglycolanhydride, is an early plastic. It is a thermosetting phenol formaldehyde resin, formed from an elimination reaction of phenol with formaldehyde. It was developed by Belgian-born chemist Leo Baekeland in New York in 1907.

One of the first plastics made from synthetic components, Bakelite was used for its electrical non-conductivity and heat-resistant properties in electrical insulators, radio and telephone casings, and such diverse products as kitchenware, jewelry, pipe stems, firearms, and children toys.

How do I rate this camera

Best for sunny days and good light, because of it’s fixed exposure.